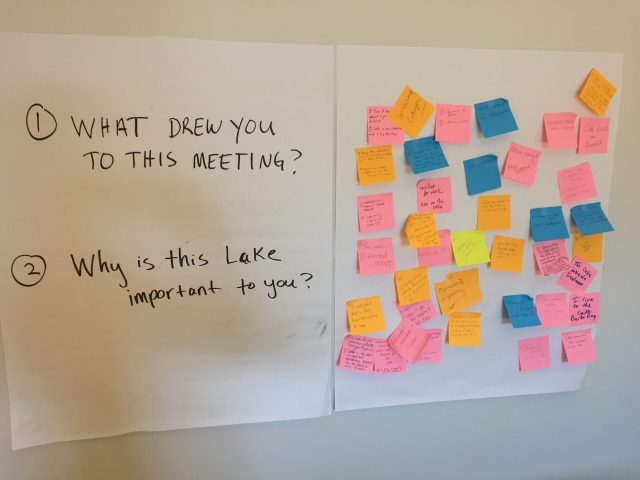 When I’m working on a controversial or complex project, one of my favorite opening exercises at a public meeting is a productive venting session. During this activity, I ask everyone to answer two questions:

“Why did you come to this meeting?”

“Why is this issue important to you?”

Sound terrifying? You’re not alone. In fact, many of my clients resist the idea of such a direct approach. “We don’t want to encourage negativity” they say. Or, “Isn’t it counter productive to invite disagreement before we even get started?” Of course we don’t want create a counterproductive atmosphere. But ask yourself this: if people are not already concerned about a proposal, what is the risk that asking how they feel about it will cause concern that wasn’t there to begin with?

What is more likely is that people get engaged in a project because they were already concerned. The real risk, then, lies in ignoring their concerns. Without an outlet built in, our meetings (and entire engagement processes) can get bogged down with unacknowledged emotions, concerns, fears, hopes, and desires. Left for too long, these unacknowledged emotions will overwhelm the room (or the whole project).

Local officials exploring a proposal to install a traffic circle at an intersection, decide to convene a public meeting. They arrive at the meeting armed with traffic studies, safety studies, and design concepts showing how much safer a traffic circle would be. Unbeknownst to them, a group of neighbors that lives nearby believes that traffic circles are unsafe and are also a wasteful use of taxpayer dollars. Before the local officials get through the first five minutes, members of the crowd interject with questions and express skepticism. The officials become defensive about their work and assure the crowd that traffic circles are safe. But the more they assure the crowd, the less the crowd believes them. Soon, some members of the crowd are grumbling, booing, or walking out in disgust. The meeting comes to a stand still.

I have witnessed versions of the above scenario countless times. Afterwards, local officials and engineers scratch their heads and wonder, “what went wrong?”

This happens all the time

We rush to present a message before before listening to the community’s core beliefs and values. We, as practitioners and public officials, don’t usually give the public a chance to share their concerns and ideas before we overwhelm them with talking points, facts, and figures. And often we find out later that our talking points and data were in direct conflict with community’s core beliefs and values (in the case above, those values relate to safety and the role of government). Unfortunately, our response is often to turn it back on the public. In order to protect our own investment of time and energy, we convince ourselves that the public are simply irrational, ignorant, and rude. We call them NIMBY’s, or worse.

But know this: when we feel our beliefs and values are being threatened, we will defend them. We get emotional. At that point, we are less capable of having an evidence-based discussion, no matter how much data someone presents us. Don’t believe me? Consider how you felt the last time you engaged in a debate about gun control, abortion, or anti-racism. (Also see: confirmation bias.)

The benefits of productive venting

Disclosing stress (positive venting) is an effective coping mechanism for many of us. People feel immediate relief from airing grievances. It helps create acceptance and insight for the person venting. There are also benefits to the person—or people—listening. When someone shares what is on their mind, the listener gains connection, focus, and perspective.

When we give people an opportunity to share concerns at the beginning of a public meeting, we can then acknowledge their feelings at the outset. They are more likely to feel heard and validated. Having seen their concerns written in black and white, they will be more likely to listen to your presentation, rather than using that time to formulate arguments and complaints.

In short, participants will be much more open to the information you share after they have a chance to do some productive venting.

How to do it in your meeting

I advise my clients to build in opportunities for productive venting in any process before they present any key messages, evidence, or data to the public. In practical terms, here’s how it works. The short activity described below can be offered to meeting participants as soon as they walk in the door or directly after they have signed in (or in the case of Zoom, as soon as they are admitted to the meeting).

In my experience, people are delighted to be asked their opinion within 20 seconds of walking into the room. It gives them a chance to settle in to the meeting and be in the moment. This will also provide you, as the meeting host, a great opportunity to understand who is in the room and what is important to them.

Honoring People and the Importance of Assuming Positive Intent

Any cookies that may not be particularly necessary for the website to function and is used specifically to collect user personal data via analytics, ads, other embedded contents are termed as non-necessary cookies. It is mandatory to procure user consent prior to running these cookies on your website.

Subscribe to our Newsletter to stay up-to-date on what we’re working on and how you can get involved.