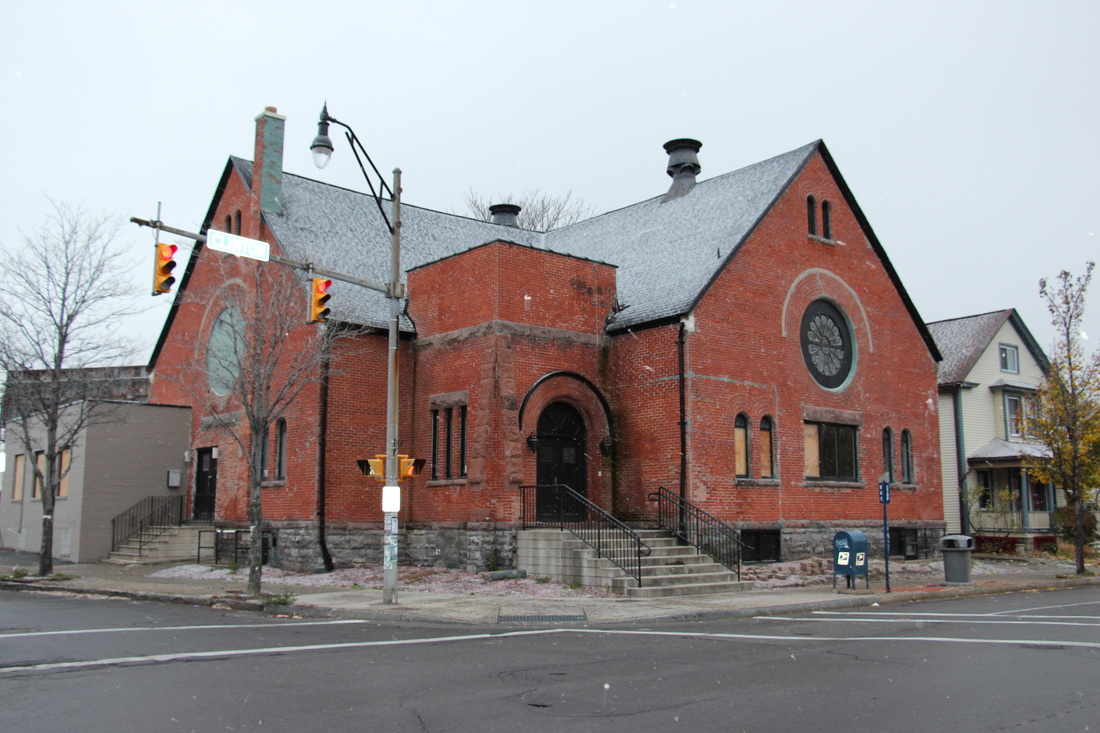 It was another great week at Highland Planning. We advertised the Senior Planner position and received several applications; participated in walkability audits in Bergen and Avon; facilitated a well-attended public meeting in the Parkside neighborhood of Buffalo; updated North Union Street merchants about the upcoming construction in downtown Olean; met with Monroe Avenue residents about our Street Management work on Monroe Avenue. And Friday, we had several meetings regarding the Headwater Foods Feasibility Study.

While all of this is happening, as it does every week, we’ve been making steady progress on the future home of Highland Planning. In 2015, we’ll be moving over to 820 South Clinton Avenue. It’s a 5,000 square foot church built in 1890.

In the rear of the building, on the first floor, we’ll have an office tenant in a 910 square foot space. This week, we figured out who that will be. I think I’ll keep that to myself for a little while longer. But, suffice to say, I’m really excited to have them and their two chocolate labs.

It was the long time home of the Rochester Community Players, who purchased the building in 1926. Apparently, the building had been used as a machine shop for the eight years prior to that. Its most recent tenant was as a church, but a fire in 2011 damaged the rear of the building and it has been sitting vacant for more than three years.

I’ve been working on its redevelopment for more than a year. My partners in the project are John Trickey, a local real estate developer, and Jeff Ching, co-owner of the Owl House.

There will be three units inside the building.

Jeff and his restaurant partners will open the Swillburger, a counter-style restaurant with burgers and fries, and the Community Playhouse, a bar and vintage video arcade.

Highland Planning will occupy the second floor office space, which is 1,600 square feet.

From 2007-2013, I worked at my dining room table, usually with a small child at my feet. Jen, Anna Liisa and I have spent the last 18 months working out of 350 square feet at 8 Public Market. Some days, that space has felt very small.

So this is going to be a big change. We’ll have a conference room, a kitchenette, a mezzanine, a closet. It’s going to feel like a castle to us. The ceilings are high. Our windows were installed this week, and there is a lot of natural light.

Next is drywall, floors, and then the finishes.

IT’S NOT JUST WHERE WE WORK

Besides having more space to work and a closet to hang up our coats, this project is significant to me personally. Sometimes, as a planner, you feel like a coach yelling into the game. You know what would make a difference, what would win the game, but you can’t physically make it happen from where you stand. You have to trust that your idea is feasible and that the players will be able execute it.

This project is tangible progress toward urban revitalization. We are stabilizing and reoccupying an historic building that has been vacant for years. And, although admittedly a smaller scale, alongside projects like Wedge 23 LLC’s renovated houses, Buckingham Properties’ Edge of the Wedge and Pathstone’s Wedge Point, John, Jeff and I are contributing to the reinvestment happening on South Clinton Avenue.

We are off the bench, on the field, and in the game.

Commercial real estate development has been a dream of mine for quite some time, and I’m so happy to have found people to work with that are making it a reality. When our office is complete, I’m looking forward to hosting a great party of planners, engineers, architects, economic developers, community activists, change makers and friends. I hope you’ll come.

Then it will be time to find another building to redevelop. I’m starting to work on that now.

Any cookies that may not be particularly necessary for the website to function and is used specifically to collect user personal data via analytics, ads, other embedded contents are termed as non-necessary cookies. It is mandatory to procure user consent prior to running these cookies on your website.

Subscribe to our Newsletter to stay up-to-date on what we’re working on and how you can get involved.